Achieving the goal of water independence. 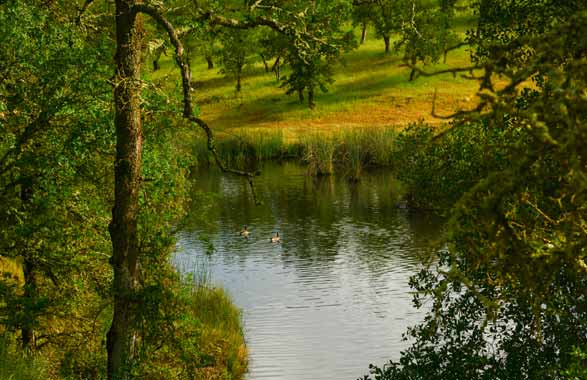 A bedrock principle of the Folsom Ranch plan is to ensure that the new community is fully provided with adequate water supplies – without diminishing the water supplies or raising costs for current Folsom residents.

The water challenge
Providing water for Folsom Ranch and the rest of the south-area development initially posed a challenge. A planning principle by city leaders was that the water supplies to existing residents should not be diminished nor should they be required to pay for water to the plan area.

To guarantee the water independence of the Folsom Ranch community, those conditions were made into the centerpiece of Measure W, a 2004 ballot initiative to guide the new area’s development. After Measure W passed, it was clear that the new community would only come to life if the water solution was satisfied.

In 2009, the state Senate passed and the governor signed a water bill requiring every California water purveyor to reduce usage by 20 percent and, if they failed to demonstrate a use for the saved water, the state would take it. To comply with this law, the city of Folsom in October 2010 developed a water management program focused on making sure the current delivery system was functioning properly and any saved water would be used within the city limits.

Both approaches yielded results. With grant funding from the United States Bureau of Reclamation, the city discovered that the water system could be better optimized. Leaks could be repaired to recapture water that was not being used — and could not be used — without significant financial commitment. As a result, the city devised a plan whereby the landowners south of Highway 50 would fund leak repairs in excess of $8 million while the recaptured water would be used to serve existing Folsom residents.

In exchange, the water supply for existing residents of the city was improved and the $1 million annual surcharge being paid by existing residents of the Parkway, Empire Ranch and Broadstone neighborhoods would be borne by the landowners in the plan area. The water savings these measures generated, plus a modification in the city’s water contract with Aerojet, recaptured 5,600 acre feet of water, said Marcus Yasutake, Folsom’s director of environmental and water resources.

Folsom wasn’t free to do as it wished with the saved water. The new law imposed three strict conditions on how it could be handled: It could simply be left to flow downstream. It could be sold to another user. Or, it could be designated for a new use so long as that use didn’t return any of the water to the people who conserved it.

Water independence and responsibility
The amount of water that was saved equaled more than enough to supply the future needs of Folsom Ranch, so rather than relinquish or sell it, the city elected to reallocate the water to the new development area. Under the law, this qualified as a new use. The courts ruled the plan was legal.

Even though the water already belongs to Folsom, there are costs associated with conveying it – costs the landowners are shouldering. However, those costs are markedly lower than the previous plan to pump water from south of Elk Grove to the area, which resulted in savings that allowed landowners to fully fund the parks, aquatic center and trails planned for Folsom Ranch.