Designed to make getting around efficient and convenient. 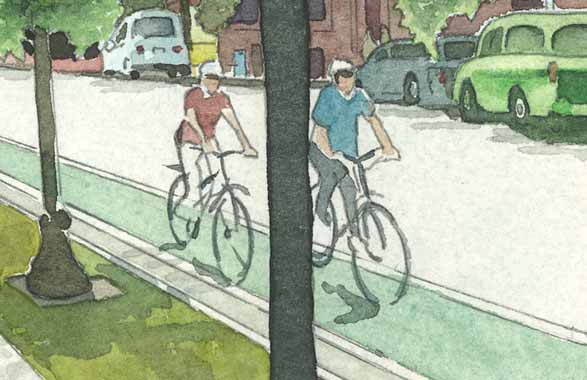 When Folsom voters outlined the requirements for future development by passing Measure W in 2004, they were adamant that the plan area not increase traffic on existing streets.

The final plan includes an abundance of transit improvements, with a road system that is now under construction and developer fee program to mitigate traffic impacts from the plan area. And that’s just one of the many highlights of the transit plan for Folsom Ranch and adjacent projects.

Reducing congestion…and emissions
The transit plan that has been designed for Folsom Ranch adds more functional and direct routes to some destinations. These improvements to reduce congestion on critical roadways.

And before any pavement was laid, the project was noted for its land plan that is designed around transit connections and reduction of greenhouse gas emissions. Measure W didn’t address greenhouse gas emissions, but a memorandum of understanding with Sacramento County did. Folsom and the county agreed to reduce emissions in the project area by 35 percent – against a national standard of 15 percent. Folsom’s final plan nailed a whopping 42.5 percent.

Several speakers at the June 2011 public hearing to adopt the specific plan for the south area lauded this result. Mike McKeever, chief executive officer of the Sacramento Area Council of Governments, cited the plan’s “extremely high air quality,” and air quality expert Joseph Hurley reported the plan was “the only project of this size to achieve that much mitigation.”

Master-planning expert Ardie Zahedani, who represented a landowners group, added that much of the credit for the savings can be attributed to a multimodal transit mix that incorporates attractive and convenient alternatives to driving, including bike lanes and sidewalks on all roads. These diverse modes of transportation along with new roadways and freeway interchanges will benefit all Folsom residents. The costs for the transit infrastructure are being borne by the landowners.

Here are the highlights of this award-winning plan: